Esu Odara is an intermediary between man and God. This was made known Mr. Abiodun, who is a traditional worshiper. He is a young and well respected Ifa worshiper in Osogbo, Nigeria.

Yoruba is a one of the major tribes in Nigeria, located at the southwestern part of the country. The tribe is known for her love for arts and culture. Except from the two major popularly known religions; Christianity and Islam among the Yorubas, many of them are also traditional worshipers with different denominations or ideologies like other religions.

According to a consulted traditional worshiper, Mr. Abiodun, he said the esu in the Bible or Quran is not the same as the esu they are worshiping. “As a matter of fact, esu odara is an intermediary between man and God. Not just an intermediary, but one of the most respected by Eledumare.

Who Is Devil (Esu) To Christians?

Christians call devil several names as sighted in the Bible. He is described as “angel of the bottomless pit” [Rev. 9:11], the accuser [Zach. 3:1], the prince of the power of the air [Eph. 2:2]. The Christians are of the belief that the devil was one time an angle in heaven. In fact, one of the most rated angel (known as Lucifer), but lost his place when he desired to take the glory, power, and honour of God Almighty the creator.

Lucifer fell from his lofty position when pride crept in and he desired to take God’s position (Isaiah 14:12–14). Lucifer attempted a coup d’état along with one-third of the angels (Revelation 12:4) but Michael the archangel and the others fought and threw them out of heaven (12:7–10). God knowing all things sent him to the earth for such thought. And this same devil misled Eve to eat from the forbidden fruit.

Who Is Devil (Esu) To Muslims?

Muslims also call esu several names, such as; chief deceiver [Qur’an: Faatir 35:5], enemy [Qur’an: Faatir 35:6], arrogant [Qur’an: Saad 38:74], popularly called, Iblees or Shaitaan. To Muslims, devil was a onetime angel or Jinn as some believe he could never have been an angel and disobeyed God. The Muslims believe that after the creation of Adam, God told all in heaven to prostrate before him, and they all did except from devil who said he could not bow for a mere man made out of clay. “I cannot bow because you created me from fire and created him from clay” [Qur’an: Al-A’raaf 7:12].

“…Then we said to the angels, “Prostrate to Adam”; so they prostrated, except for Iblees. He was not of those who prostrated.”[Qur’an: Al-A’raaf 7:11b] This got God angry and sent him to earth. Muslims share the same story of Eve eating the forbidden fruit. This is a result of promise devil gave to God after sending him on earth. “Then I will come to them from before them and behind them, from their right and from their left, and you will not find most of them as thankful ones (i.e. they will not be dutiful to you).”[Qur’an: Al-A’raaf 7:14-17].

Obviously, from how a Christian or a Muslim sees devil, would it be right to say “Esu odara is an intermediary between man and God”?

Who Is Esu to Yoruba Traditional Worshipers? 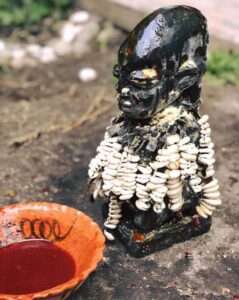 To quickly tell you what you might not know before now, all traditional worshipers worship esu. This is not in line with the general knowledge that esu is worshiped by those with black clothes, while those on white clothes don’t worship esu. According to our source, esu odara is an intermediary between man and God (Eledumare), therefore, every traditional worshiper who do rituals to beg Eledumare for one or two things must worship and consult him to get things done faster and reliably.

Mr. Abiodun, kindly tell us all you can share about Esu?

Esu is not the satan which people always claim is behind all immoral acts. He is the closest angels to Eledumare, and Eledumare gave him authorities. He is involved in all the gods that came to earth, and among them all, he chose Orunmila as his favourite. he is good, but men’s request can make him look bad.

A good example of how esu is known to be good from ifa in the consultation made by Orunmila for him to know what to do for things to work out well for him without evil coming his ways, he was told to worship and do the necessary for esu.-Odu ifa-“ogundakete”;

This quote describes how Orunmila used Esu to guide his gate for goods only to come into him and not any form of disaster by giving him amounts of money. He gave Esu 40 coins to send away all evils, and 120 coins to allow all blessings in. Esu did this by blocking entrance for death, poverty and failure, while he opened door for all blessings to Orunmila.

Orunmila was surprised and said to esu “Osa to’tori ogoji ti o ba onan je, ti owa to’ri ogofa tun onan se” (a deity who because of 40 coins destroyed the road, and for 120 coins make the road a pleasant one). That is one good of esu.

Checking through another good side of esu from ifa quote, ‘ogbe ate’.

The quote talks about how Orunmila closed his eyes and pretended dead, to see who truly loves him. He told his followers to tell all other gods that he is dead. They heard about it and they all came one after the other claiming that Orunmila owed them money while on earth, and insisted that his followers would pay them.

On the side of esu, he heard of Orumila’s death while barbing, and he left the place with half-done hair to go and check Orunmila. On getting there, esu cried and insisted he must follow Orunmila to the grave. Due to his persistence, Orunmila’s followers had no choice than to tell him the truth.

Orunmila was so surprised that Esu could stay with him that much. Esu told Orunmila there is nothing he will do without him. Since then, Orunmila made a similar promise to esu that there is nothing he will do without Esu. If Orunmila will eat anything, he must give Esu his own by putting a portion on the ground. This is still practicable among all core traditional worshipers till today.

The other side, why men said esu is evil.

Esu is not the one behind evil, humans are those who do evil to one another. When people consult esu, he guilds them to avoid evil, but people are always greedy and wicked which eventually brings calamity upon them.

Interpretation; Agunwa and Amin are friends who were in abject poverty, they went for ifa consultation. They were told to go and worship Esu by going to him with 10 rats. They turned it down as they considered it too easy to solve their level of extreme poverty.

One of them thought about it and went to the other that they should go and try it. His friend turned him down as he still can’t believe how 10 rats would liberate him. He went to the herbalist alone to get the instruction and do the needful.

Instruction on how to worship esu was to go to esu for 10 days. A day with a rat to tell esu whatever he is in need of. He was warned never to give esu more than one rat in a day. He did this for 10 days and he got so rich.

Amin heard about his riches and was disappointed that Agunwa did not carry him along. He told him it’s the same process he denied. Hearing this, he was so moved and went to get the 10 rats without going to the herbalist at all. He got to esu and gave him 10 rats in a day; esu gave him money truly as money was falling upon him till he was dead. “Now, how is esu wicked?”

How could esu odara be the intermediary between man and God when Christians and Muslims believes he was already sent to the earth by God, and has nothing to do with God?

I am not disputing that, but the esu we are serving is not the rejected esu that they are claiming.

The Sacred Forest of Igbo Olodumare