The sacred forest of igbo Olodumare is located in an ancient town of Oke-Igbo, Ondo State. The first place the general public realized the mysterious facts about Igbo Olodumare was in the works of David Olorunfemi Fagunwa; Ogboju Ode Ninu Igbo Olodumare, Ireke Onibudo, Aditu Eledumare among others.

The sacred forest of Igbo Olodumare was dominated by goblins and they made it difficult for humans to either hunt or farm.

Brief chat with King of goblins

One of the notable individuals who contributed to chasing away the goblins for humans to make use of the fertile land is Chief S. O. Odejinmi, also known as Oba Awon Iwin (King of goblins). The name ‘Oba awon iwin’ came as an appellation given to him after his contributory efforts for peoples comfort in the community.

Before going for the tour into the sacred forest of Igbo Olodumare for us to witness the mysteries, he disclosed how they have been trying to make sure the location is recognized as a major tourist center in Nigeria. “Efforts are being made to make this place a more tourist center where we can have more people to come and even people from outside the country.” He said.

Mysterious Locations In The Sacred Forest Of Igbo Olodumare 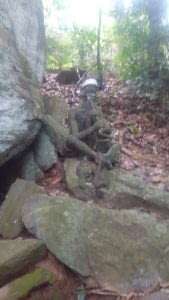 Prayer Spot: The first place after the special gate that is always locked to show that the forest is not where anyone can visit anyhow without necessary rites being done is the prayer ground where people drop money and speaks their desires quietly.

Egberiwese: This is where Olowo Aye who was the grandfather of baba D. O. Fagunwa met a beautiful spirit. This spirit is known as Ifepade. Olowo Aye fell in love with Ifepade due to her generousity.

Isalu Aye and Isalu Orun: It is a ‘Y’ junction where Ifepade and Olowo Aye departed despite the desire of Olowo Aye to go with Ifepade. Olowo Aye took his journey through Isalu Aye where he met a gnome crying. Olowo Aye asked the gnome why it’s crying, it said it only cries for the insatiability of men. Men are the best creature of God, yet, they are never satisfied.

Oke Langbodo: It is a sloppy mountain. It’s considered a mountain meant for only strong men to climb. These strong men are considered as “Akoni meje”. Not too far from Oke langbodo is where we have Ibujoko Olowo Aye, Omo Akowediran (Olowo Aye resting place)

Esu Kekere Ode: This esu kekere ode still shows anger to the people till now. Anytime the custodians of Igbo Olodumare sense there is anger; they worship it with palm oil and other necessary traditional ingredients. 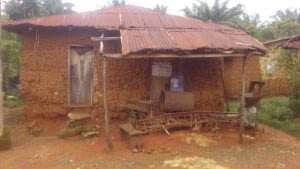 Ajingu Idakeroro: The place is described as a very quiet place in Igbo Olodumare. It’s so quiet due to an encounter of a particular fearful spirit with a hunter. The fearful spirit had record of victories over several hunters not until when a particular strong hunter defeated it.

Birds and other animals in the forest shouted and were so happy, but the fearful spirit cursed them that it will be their last shout in that environment. Till today, no bird of any kind or animal can make a sound in the mysterious location.

Oja Awon Iwin: This is where goblins in Igbo Olodumare do their buying and selling. It is said that this particular market still functions till now. Anyone who is powerful can feel it, see it, even hear them buying and selling if they pay visit there at night. Not so far from there is ogbun ainisale.

Ogbun Ainisale: It was like a prison where offenders with no pardon were thrown after binding their legs and the hands. It is so deep that no one dare try to see the depth from the top.